Injuries are inevitable and the world is full of diseases, parasites and infections.  For the player character there are several options in regards to treating these problems.

Although the medical science of the Victorian era was primitive by modern standards, by 1890 things were beginning to look up.  Anesthesia is in general use, Lister’s sterilization techniques are accepted practice.  Bleeding as a treatment has been discontinued (mostly.) And a variety of new medicines and treatments are available (some are even effective!)

Physicians are the elite of the medical profession.  They will diagnose an illness and prescribe medications or treatments to cure the ill.  They rarely, if ever, engage in the manual labor of setting bones, making incisions, cutting tissue, extracting bullets, etc.  Most have had some training in these things, especially younger Physicians coming out of the Medical Colleges in the last decade or so.  But generally the work of setting bones, stitching wounds and so on, is the provenance of the Surgeon.  Surgery as field of study and a science of its own has only developed in the last fifty years.  (A century ago surgeons were part of the Barbers Guild!)  Fortunately for the player characters, alternate sources of Healing may be available! 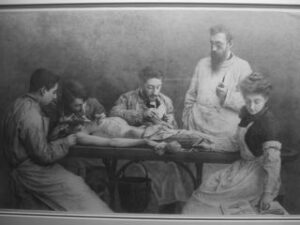 Ague – Fever and chills, as those associated with malaria.
Apoplexy* – A stroke; or a sudden fit resembling a stroke.
Catarrh – Nasal or sinus congestion due to inflamed tissues, as with a head cold.
Chilblain – Swelling of the extremities caused by exposure to severe cold then heat.
Consumption* – The wasting away caused by the final stages of pulmonary tuberculosis.  An extremely common disease in the Victorian era.
Croup – A number of similar diseases, primarily striking children. Symptoms ranged in severity from difficulty breathing and hoarseness to convulsions and death.
Dropsy – A symptom, rather than a disease itself; swelling due to accumulation of fluid in the tissues. It might affect any part of the body.
Dyspepsia – Indigestion.
Gangrene – Common infection in untreated wounds, generally in limbs but may affect organs.  Limb must be amputated or it spreads.
Lumbago* – Chronic lower back pain and numbness.
Palsy* – Paralysis; sometimes localized to one part of the body.
Pleurisy – Inflammation of the lining of the chest. It could cause a dry cough, up to chronic pain and a hunched posture.
Putrid Fever – Another term for Typhus.

* These have no medical cure.  Treatment only addresses symptoms and provides pain relief and comfort. 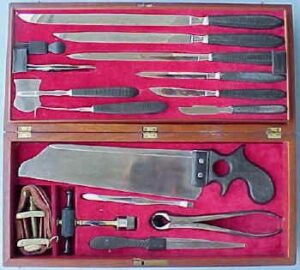 A normal sword, knife or spear wound is treated as follows:
Bind the wound then allow normal healing or employ spells etc to speed up the process.

With a bullet or arrow wound the procedure is a little more involved.

With a bullet wound the procedure is different.
With a wound of 3 points or less the bullet does not need to be removed. It is assumed that the bullet either passed through the body part or lodged in some fleshy part where it will do no harm in the future.
With a wound greater than 3 points the bullet must be removed before any healing, natural or magical can occur. A First Aid roll will not remove the bullet. This will require a normal Surgery roll or a Physicians roll at -2. A success in either case removes the bullet with no further injury. A failure will cause 1-3 points damage and removes the bullet. A critical failure will cause 2D4 damage and the bullet will remain and another attempt must be made to remove it.  A second attempt made after a Critical Failure BY THE SAME Surgeon is at -2. A second attempt by the same Physician is at -4.

Well, mostly.  Wounds that are left untreated will become infected (Save vs Poison at -2 for an injury to arm or hand. -3 for injury to leg.) and the character will, if lucky, only lose the injured limb.  Otherwise he or she must Save vs Poison every day (-4 to torso) until it IS treated, or they fail the save and die.  Infections will prevent any healing until they are treated, which requires the underlying wound to be treated first.  Healing a previously infected injury DOUBLES the time it takes to heal the injury.

However, IF the wound has been treated and uninfected, natural healing can commence.  Injury to Constitution requires a Save vs Constitution EVERY DAY.  A failure means no healing that day.  A Success means 1 point is recovered. A Natural 20 means 1d3+1 points are recovered that day. While a roll of 1 means a set back in healing and a loss of 1d3 points.

Medical Supervision:  Having a trained Medical Doctor in attendance will speed healing and recovery of Constitution Points.  When attended by a Physician or Surgeon, success rolls will result in the recovery of 2 points per day and a Natural 20 means 1d4+1 points are recovered that day.  With a Doctor attending a roll of 1 does NOT result in a set back.  There is simply no healing that day. 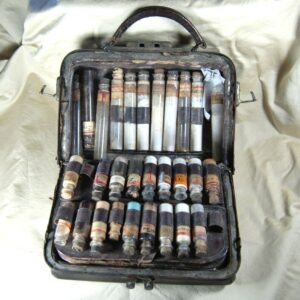 Over the Counter Cures: Medicine in general was in its infancy during the 19th century and most ‘over the counter’ cures were useless or worse then useless. The best of them would provide some pain relief (due to ingredients that included Heroin, Cocaine and Opium swimming in high concentrations of alcohol.  Various liniments and salves were helpful for sprains, abrasions, rashes and minor burns.  Use of Over the Counter cures can benefit Hit Point Recovery (see below) beyond this they have no real value in healing Constitution points. 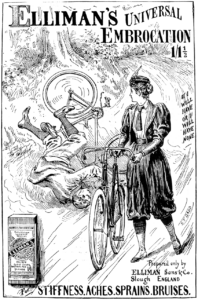 No Hit Points can be recovered until the Constitution Score is back full.

Assuming that the character never lost Constitution points in the original injury, or if he did he has completely healed the injury and regained full Constitution, Hit Points are recovered at a natural rate of 1 per hour of resting and, if the player rolls his character’s Constitution OR LESS on a D20 an additional 1d4 hit points can be recovered in that hour.  A failed roll still has the character recover 1 Hit Point in that hour of rest.
Use of an Over the Counter Cure will add 1d3 hit points in the hour after using the cure.  Due to the high levels of narcotics and alcohol in most Cures a character can use the substance only once per day!  A second dose within 8 hours of the first requires a Save vs Poison or fall into a deep sleep for 12 hours.  Additional doses, after the 8 hours but short of 24, will have no benefit.

Example: The Character has a Constitution of 12.  The player rolls a D20 and rolls an 8.  The player then rolls a D4 to see how many extra Hit Points the character recovers in that hour of rest. 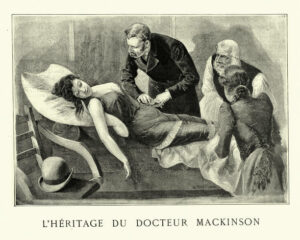 A character sustains enough injury to not only go to zero Hit Points and unconsciousness, but there was also enough damage done to affect the character’s Constitution, he or she is unconscious AND Bleeding!  Left untreated the character will bleed out 1 Constitution point per Minute until reaching Zero Constitution and Death.
Binding Wounds, treatment by an untrained individual using bandages or rags, etc to wrap the wounds, will stop further blood loss.  But that is all it will do.  The injured character may recover, with a chance of infection (see above.)
A successful First Aid roll will stop the bleeding and Stabilize the patient and allow the immediate recovery of 1 Constitution point. (See the section on Bullet Wounds if applicable.)

The following examples of medical fees were established at a meeting of the College of Physicians of Philadelphia, and are typical of the time. 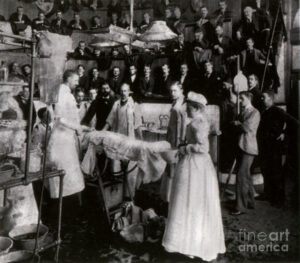 These were obtained from an 1880 advertisement: